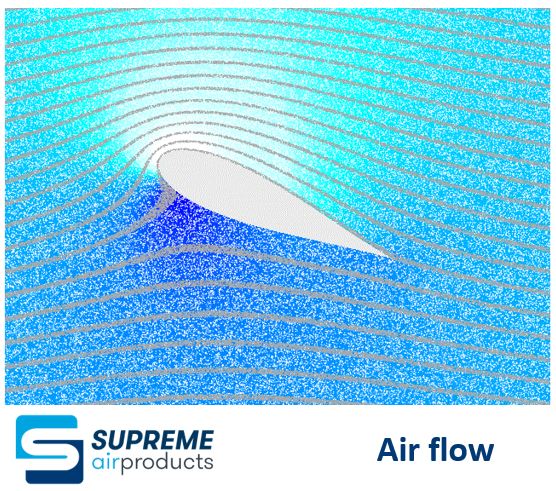 Air flow, or airflow, is the movement of air. The primary cause of air flow is the existence of air. Air behaves in a fluid manner, meaning particles naturally flow from areas of higher pressure to those where the pressure is lower. Atmospheric air pressure is directly related to altitude, temperature, and composition.

In engineering, airflow is a measurement of the amount of air per unit of time that flows through a particular device.

The flow of air can be induced through mechanical means (such as by operating an electric or manual fan) or can take place passively, as a function of pressure differentials present in the environment.

The Reynolds number, a ratio indicating the relationship between viscous and inertial forces in a fluid, can be used to predict the transition from laminar to turbulent flow. This number and related concepts can be applied to studying flow in systems of all scales.

The speed at which a fluid flows past an object varies with distance from the object’s surface. The region surrounding an object where the air speed approaches zero is known as the boundary layer. It is here that surface friction most affects flow; irregularities in surfaces may affect boundary layer thickness, and hence act to disrupt flow.
Units

Airflow can also be described in terms of air changes per hour (ACH), indicating full replacement of the volume of air filling the space in question.
Measurement

The instrument that measures airflow is called an airflow meter. Anemometers are also used to measure wind speed and indoor airflow.

Anemometers may use ultrasound or resistive wire to measure the energy transfer between the measurement device and the passing particles. A hot-wire anemometer, for example, registers decreases in wire temperature, which can be translated into airflow velocity by analyzing the rate of change. Some tools are capable of calculating air flow, wet bulb temperature, dew point, and turbulence.

Air flow can be simulated using Computational Fluid Dynamics (CFD) modeling, or observed experimentally through the operation of a wind tunnel. This may be used to predict airflow patterns around automobiles, aircraft, and marine craft, as well as air penetration of a building envelope.
Control

One type of equipment that regulates the airflow in ducts is called a damper. The damper can be used to increase, decrease or completely stop the flow of air. A more complex device that can not only regulate the airflow but also has the ability to generate and condition airflow is an air handler.

Measuring the airflow is necessary in many applications such as ventilation (to determine how much air is being replaced), pneumatic conveying (to control the air velocity and phase of transport) and engines (to control the Air–fuel ratio).

Aerodynamics is the branch of fluid dynamics (physics) that is specifically concerned with the measurement, simulation, and control of airflow with air nozzle. Managing airflow is of concern to many fields, including meteorology, aeronautics, medicine, mechanical engineering, civil engineering, environmental engineering and building science.

We recommend all Supreme Air Products such as our vortex tubes should have an adequate unrestricted Air flow to achieve process goals.