How is heat transferred? 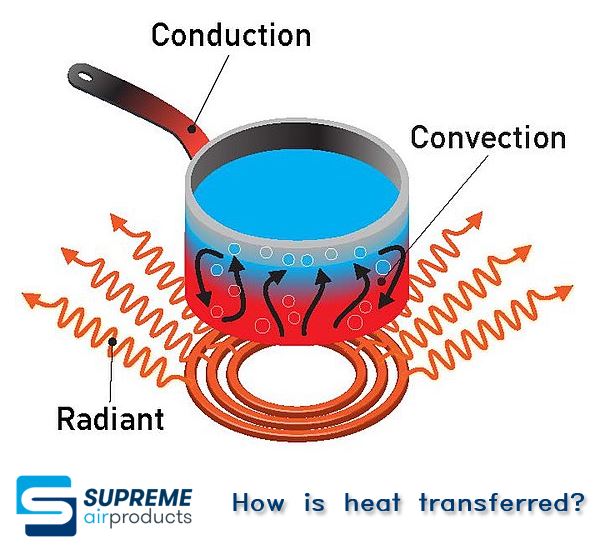 Whenever there’s a temperature difference, heat transfers occur. Heat transfers may happen rapidly, like in a cooking pan. It can also happen slowly through the walls of a picnic ice chest. The rate of heat transfers is influenced by materials, air movement, and the choice of color. Many processes involve heat transfer, but every operation takes place by only three methods: conduction, convection, and radiation.

Heat is always looking to move to cooler areas. Understanding the physics behind heat transfers will help you insulate and save money on expensive energy bills. Whether you reside in a chilly or hot climate, it’s all about keeping the heat at the same place.

Conduction is a heat flux through solid materials in direct contact. The atoms of higher energy vibrate against one another, which transfers their power to the lower ones. It also applies to higher temperature adjacent atoms to lower temperate ones. The heat and intensity will cause to vibrate and thereby move the electrons to areas of lower intensity and heat until they achieve a balance. Atoms have a more considerable distance from one another, especially metals. Subsequently, fluids and gases channel less conductivity than solids.

For example, heat transferred between the stove’s burner and the bottom of a pan is transferred by conduction.

Convection describes heat transfers between a solid surface and a liquid or gas in motion. When the fluid travels faster, the convective heat transfer subsequently increases. Heat is transferred by moving higher energy particles away from their heat source and carrying it along with them. This event only happens in fluids, liquids, and gasses, where the particles are free to move in space.

Convection is the motion of thermal energy by moving fluid rather as opposed to atoms. This motion appears because of density.In a closed environment, the convection current circulates freely around the area, distributing the heated particles and therefore transfer their heat. Two types of convection are natural and forced convection.

Natural convection is a motion that results from the hot atoms in the fluid, where they move under the influence of gravity. They move upwards towards the cooler particles in the air. In forced convection, the liquid is forced to travel over a solid surface with an external source’s help. Every day examples take place in a forced-air furnace and the rising clouds of cigarette smoke.

Mechanical equipment can transfer heat through convection by using compressed and pressure differential. An example of this would be a Cabinet cooler.

Radiation is a heat flux through electromagnetic waves through space. This kind of heat transfer occurs without an intervening medium. Hot objects emit infra-red radiation from their surface, which in return heats any matter surrounding them.

Particles emit and receive even when the temperature stable. For instance, sun rays heat the earth with radiation every day.

Thermal engineering concerns the generation, conversion, and use of heat transfers. Involved in every sector of the economy, heat transfers are one of the critical fundamentals of physics.